Your Complete Guide to Whales of the Pacific

One of the great things about living on the west coast is that we are privy to an amazing diversity of wildlife that includes the whales of the Pacific.

If you are a boater, there’s a pretty good chance you’ve seen seals, dolphins, transient or resident orcas and other whales as you cruise the waters around Vancouver Island.

While orcas and seals are fairly easy to identify, it isn’t always that easy to know what you are looking at.

This quick guide will help you identify the whales of the Pacific and teach you the do’s and don’ts of interacting with these amazing creatures.

What are the Types of Whales Found in the Pacific? 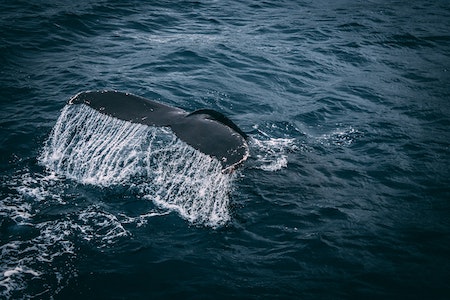 Along with orcas, dolphins and porpoises, whales belong to the order Cetacea, which consists of completely aquatic mammals.

There are 8 types of whales found in the Pacific, including:

Gray whales are a species of baleen whale, which means that they have a comb-like plate in their mouth that serves to sift plankton from the water. As a migratory species, the gray whale travels between their breeding grounds in Mexico through the Pacific to their feeding grounds in the Bering Sea. They are typically dark gray, mottled with lighter gray. Their throat has 4 deep ridges running backward from the mouth to their short flippers.

Humpback whales are a species of baleen whale. Their heads are knobby, they have long pectoral fins and a torpedo-shaped body that is narrow and tapered at both ends. Male humpbacks can produce a song that can last anywhere from 4 to 33 minutes. 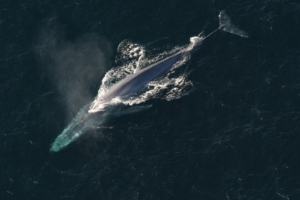 The blue whale is a species of baleen whale and is the largest mammal to have ever lived. Featuring a torpedo-shaped body, they are blue-gray in colour, with two pectoral fins, a small dorsal fin and a broad tail.

The smallest of the baleen whales, the minke resembles a miniature humpback whale, except that their sickle-shaped dorsal fin is much more pronounced.

The sperm whale is a species of toothed whale, meaning simply that they have teeth instead of a baleen plate. The most notable features of the sperm whale are the huge, blocky head and the narrow lower jaw. They are generally dark blue-gray or brown in colour, with short pectoral fins and a stubby dorsal fin.

Average Length: up to 79 feet

The short-finned pilot whale is one of two species of Cetacean in the genus Globicephala, together with the long-finned pilot whale. It features a bulbous, melon-like head, a body that more closely resembles that of a dolphin, and a uniform dark gray colour.

A species of baleen whale, the North-Pacific Right Whale resembles a shorter version of the humpback whale. It is predominantly dark gray in colour, with some white on its underside. It features two short, rounded pectoral fins and no dorsal fin.

The fin whale is a species of baleen whale and is known to be the second-largest species of whale. It has a long, sleek torpedo-shaped body, with a small dorsal fin set close to the tail. Its body is tapered at both ends, with slender pectoral fins.

For more information and images see this guide to whales, dolphins and porpoises in the Pacific Ocean from thewhaletrail.org

What to do When You Sight a Whale 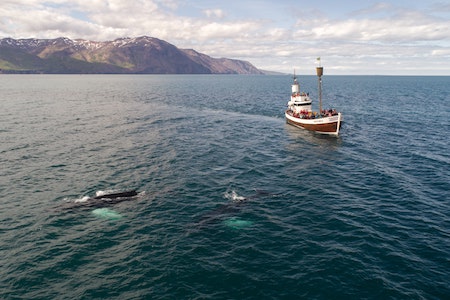 What Not to do When You Spot a Whale

Well-intentioned boaters can often disturb whales and other marine life without even thinking about it. The best way to observe whales is by standing onshore and using binoculars, but if you happen to come across whales while you are out on your boat, there are a few things you should never do.

Here’s a quick list of what not to do when whales are nearby:

For more information on safe whale watching, read this guidance on watching marine wildlife from the Department of Fisheries and Oceans Canada

Do you want to experience the beauty of the whales of the Pacific on your own terms? It could be time to invest in a yacht to explore the waters around Vancouver Island.

At Van Isle Marina, our yacht sales team is ready to help you find the best recreational boat for your needs. Talk to our crew about your next boat purchase today.