An Introduction to One of Vancouver Island’s Most Popular Activities

Vancouver Island is home to spectacular whale watching opportunities, with numerous companies offering tours up and down the Island. But if you have your own boat, you can easily 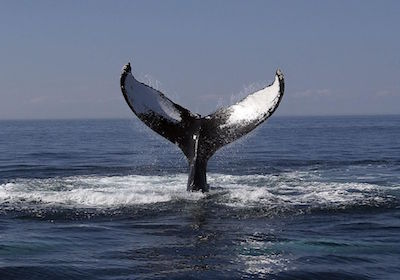 become your own personal whale watching tour guide. The best part is that whale watching can be done almost anywhere around the Island – and you might even spot some without even trying that hard.

Types of Whales Around Vancouver Island

The most common types of whales to watch out for around Vancouver Island include resident and transient Orcas, humpback whales, and Pacific gray whales.

Orcas, also known as “killer whales”, are black and white toothed mammals that are actually members of the dolphin family. They are the smallest “whales” on this list; a male orca is 5 to 7 metres long and weighs around 6 tonnes, while a female orca is 3 to 5 metres long and weighs about 3 to 4 tonnes. Their dorsal fins can get to be around 2 metres high, so they’ll be quite easy to spot. They also aren’t afraid of slow-moving, quiet boats and are actually known to swim right up to lucky boaters and kayakers. 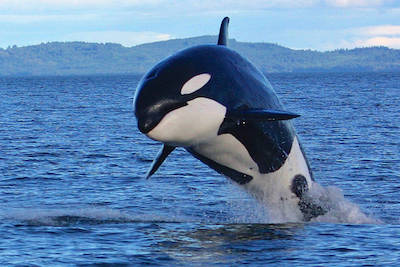 Where to find them: Resident orcas are commonly found around the Gulf Islands, the Southern Coast near Victoria, the Strait of Georgia near Vancouver, and the Johnstone Strait (Campbell River, Telegraph Cove). There are approximately 80 “northern resident” orca whales who live and travel around Northern Vancouver Island, while there are approximately 220 “southern resident” orcas living around Southern Vancouver Island.

There are also around 260 transient orcas that are most common around the northern part of Vancouver Island, including near Campbell River, Telegraph Cove and Port Hardy. Some have also been known to be near southern Vancouver Island as well (Victoria, Oak Bay, Sidney, and Sooke).

You’re more likely to spot resident and transient orcas on the east coast of the island, as well as the southern and northern tips of the island, rather than the west coast.

The best time to view orcas in the Pacific Northwest is from May to October. 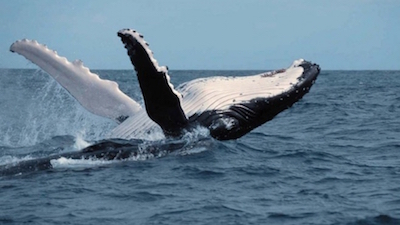 Humpback whales are the largest whales living around Vancouver Island, with lengths varying from 12-16 metres and weighing nearly 80,000 pounds! In addition to their sheer size, which exceeds the length and weight of a fully loaded school bus, humpback whales are also known for their unique sounds and songs, and beautiful breaches.

A humpback whale’s long pectoral fins and knobbly head give it a distinctive body shape that’s greyish on top with a whiteish underbelly.

Where to find them: Humpback whales near Vancouver Island are most common about 30 miles off the shores of Ucluelet, Bamfield and Tofino (Barkley and Clayquot sound). They can also be spotted around Telegraph Cove and Port McNeil.

The best time to view humpback whales in the Pacific Northwest is from May to September.

Pacific gray whales are medium to dark gray or black in colour and can grow to be up to 13-15 metres. The females are slightly larger than the males (the opposite is true for orcas). Adult gray whales have a mottled appearance caused by scratches, and barnacles and orange sea lice that make a home of their skin. Gray whales do not have dorsal fins, so instead be on the lookout for their vertebral bumps or “knuckles” along their lower backs.

The ultimate time to spot a Pacific gray whale is between March and April. During this time, around 20,000 gray whales are migrating from Mexico (where they have babies) to Alaska (where they feed on cold-water crustaceans and more).

You are also expected to reduce your speed to less than 7 knots and avoid fishing when you’re within 1,000 metres of a killer whale. Areas to be aware of include Gulf Islands, the Strait of Juan de Fuca and the Mouth of the Fraser River.

In general, when you see whales and wish to get closer:

If you’ll be in the area and wish to learn more about whales on Vancouver Island, check out the 33rd annual Pacific Rim Whale Festival happening March 20-28, 2020 at the Pacific Rim National Park Reserve, Ucluelet and Tofino on Vancouver Island’s west coast. The festival is an annual spring celebration that marks the typical return of the migratory gray whales as they make their way to the Artic Ocean.

While whale watching, you’re likely to spot plenty of additional wildlife in the area, including bald eagles, dolphins, porpoises, seals, otters, sealions, and countless seabirds. Read more about the other wildlife viewing and birdwatching opportunities on the Island.

Buying a Whale Watching Tour Instead

If you’d rather try whale watching with an experienced tour guide before going for it on your own, there are many whale watching companies to choose from. Typically, tours are 3 to 5 hours long, with many promising a 95% chance or more of spotting whales. Some companies offer different types and sizes of boats. Aim to arrive 30 minutes early so as not to miss your scheduled departure time, and dress in warm layers to beat the chill of the ocean air.

Many boats have washrooms on board and are wheelchair accessible. Don’t forget your binoculars and camera – preferably one with a great zoom!

At Van Isle Marina in Sidney, BC, we offer a wide variety of boats and motor yachts that would be perfect for your next whale watching adventure. Check out our selection of new and used yachts and boats for sale, or come see us in person and let us show you around.

Vancouver Island Weather: What to Expect